One of the characters Finau drowned. Drowning is common in New Zealand.

10:28 AM Tuesday Dec 29, 2015
With eight water-related deaths since Christmas Day, Kiwis are being urged to only swim at patrolled beaches for the rest of the holiday season.
New Zealand's drowning toll this year passed 100 yesterday (Monday), which compares with 90 for 2014, and per head of population, is twice as bad as Australia's.
Surf Life Saving New Zealand chairman Geoff Hamilton says of the eight water-related deaths, including six coastal, that have taken place over the last four days, none of them have been at patrolled locations.
"I cannot stress enough, the need for people to choose one of these spots to swim at," he said.
"The beach is our natural playground but it can also be deadly."
Since Christmas Day, seven people have drowned, including four on Christmas day, and 12-year-old Jack Martin was killed on Boxing Day when he was riding an inflatable sea biscuit and was hit by a passing vessel on Blue Lake in Central Otago.
Yesterday, a 50-year-old local was free-diving at the private Puatai Beach near Gisborne when he was caught in a rip just after 2pm.
His family were trying to revive him on rocks when the Eastland Rescue Helicopter arrived. However, the man died at the scene.
Eighty per cent of all drownings are males.
Water Safety New Zealand is targeting Kiwi men and boys in 2016.
It wants to eventually bring the male drowning death toll of 80 down to around 40, but a "realistic goal" for the new year would be around 60, WSNZ chief executive Matt Claridge said.
Males are often more involved in aquatic activities, he said, but with that brought a higher chance of risk taking, and males were prone to being "pretty confident ... before they've even got any skills or basic knowledge, which is a problem".
Drownings in rivers and river mouths are a particularly bad New Zealand problem, as are the "cultural reasons for heading to the river," Mr Claridge said.
"Not many other countries in the world that have Maori and Pacific people that gather kai to put food on the table. For some elsewhere it's a sport but here it's part of every day life and that brings problems."
Two of his key messages were for parents to get in water with their kids, and for men to wear life-jackets on boats: "They are absolutely no use to you in the cabin."
And if the weather conditions are poor, then people should make the right call and not head out onto the water, Mr Claridge said.
"Our message is, stop and think before going near the water."
Lifeguards from 74 Surf Life Saving Clubs are currently patrolling around 90 of the most popular beaches across New Zealand.
Ten people drowned during last year's holiday period.
With another week to go until the end of the official holiday period (6am on January 5) Mr Hamilton hopes no one else drowns over this time.
If people can't get to a patrolled location, they need to consider the risks before entering the water, he said.
And when it comes to children, Mr Hamilton says supervision is key.
"You have to keep them within arm's reach at all times. It's as simple as that."
To find you nearest patrolled beach, visit www.findabeach.co.nz


How to identify a rip


What to do if you get caught

• Don't panic!
• Let the rip sweep you along until the current weakens
• When the current has subsided, swim parallel to the shore for 30-40 metres before returning to shore, swimming slowly
• If you are in trouble, float on your back to preserve energy and wait until the rip has stopped taking you out before swimming away from it.
• If you are at a patrolled beach, raise your hand to alert the surf lifeguards that you need assistance. 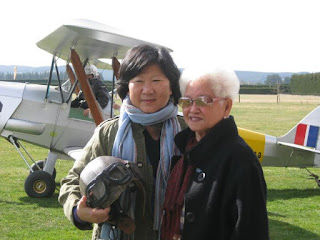 This is Mrs. Chew Tien Kui aka Connie Ang. She is my Kai Mai aka Godmother , a wonderful person.

In this book, Nadine also had a Chinese Kai Ma.
Posted by Ann, Chen Jie Xue 陈洁雪 at 11:35 PM No comments:


In my book, a twenty something Finau drowned in a New Zealand beach.

1:22 PM Monday Dec 28, 2015
The body of a foreign 22-year-old male was recovered from the surf at Mt Maunganui this morning.
Police believe the man entered the water in the early hours of this morning and said it appeared he had drowned but this could not be confirmed until a post mortem was completed.
He was found floating in the surf opposite Rabbit Island by a person walking their dog about 6.20am.
Tauranga police Senior Sergeant Glenn Saunders said inquiries were being made, including speaking to people who knew the man and making inquiries into possible sightings last night.
Posted by Ann, Chen Jie Xue 陈洁雪 at 11:12 PM No comments: