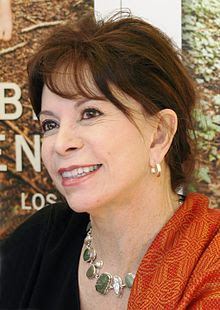 listen); born 2 August 1942) is a Chilean writer.[1][2] Allende, whose works sometimes contain aspects of the "magic realist" tradition, is famous for novels such as The House of the Spirits (La casa de los espíritus, 1982) and City of the Beasts (La ciudad de las bestias, 2002), which have been commercially successful. Allende has been called "the world's most widely read Spanish-language author".[3] In 2004, Allende was inducted into the American Academy of Arts and Letters,[4] and in 2010, she received Chile's National Literature Prize.[5]
Allende's novels are often based upon her personal experience and pay homage to the lives of women, while weaving together elements of myth and realism. She has lectured and toured many American colleges to teach literature. Fluent in English as a second language, Allende was granted American citizenship in 2003, having lived in California with her American husband since 1989.

Isabel's second book was written when her daughter died. She wrote about void, emptiness, darkness Just like Isabel, my first book brings someone to connect with me almost every day.  As a writer, the greatest accolade back from a neonatal nurse from the University hospital of Toronto. She said she read my book. The head of the NICU there gave her the book to read before she took up her position.

I would be a dream I won't ask if I can achieve a fraction of her success. I have already succeeded. Recently, a counselor/therapist read my 4th book, Cry of oppressed women told me she will use it as reference for her work.