After being forced out of her Auckland CBD shop due to soaring rent, Deanna Yang, 25, has taken to the streets to sell her cookies in true food truck style.
The Moustache Milk & Cookie Bus opened for business for the first time on Wednesday, parking up in Aotea Square.
When the self-titled "chief cookie officer" heard her Wellesley St shop's rent was going to be put up 40 per cent, she knew she had to make a change. 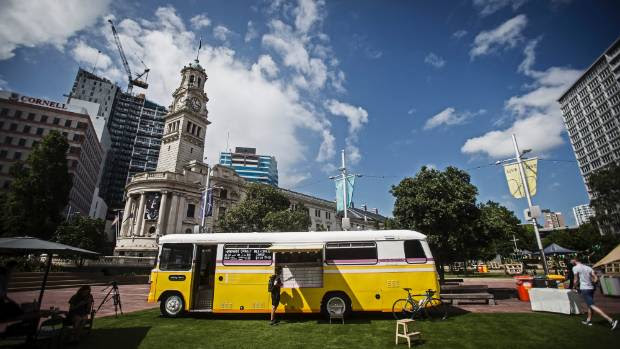 "At the time I was really surprised, that in one year, the value has supposedly increased by 40 per cent."
READ MORE:
* Night Noodle Markets - much more than just noodles
* Crowdfunding key for taco truck
* Cheap eats: The 30 top meals for $10 in Auckland, Christchurch and Wellington
* Best food truck tucker
So the young entrepreneur bought a 1978 "old-school Bedford school bus" and kitted it out with a commercial kitchen capable of pumping out twice the number of cookies her old store could.
"I've always wanted to open a cookie shop since I was eight years old, but another thing on my bucket list was to open a food truck.
"I thought, let's combine two of my dreams into one, and that's kind of how the Moustache Milk & Cookie Bus came to be," Yang said.
But dreams don't come easy and neither does renovating a bus built in the 1970s.
When Team Mo [Moustache] closed down their original store after three years in business, they decided to give crowdfunding a go to make a cookie vending bus a reality.
A whopping $90,000 was donated in four weeks, a true testament to the store's popularity and dedicated followers.
"And while that does sound like a lot of money, we actually went over budget by two or three times that," Yang said.

"It was a challenge but we had a lot of fun building it."

The bus sells the same gourmet cookie selection as the original store, with favourites being the chocolate peanut butter and Snickers cookies.
It will remain Auckland for the next few months, before winding its way to Wellington and eventually embarking on a New Zealand-wide tour from Cape Reinga to Invercargill.
So why cookies? Yang said it all comes back to her childhood.
"Growing up, my mum was a solo mother, raising us three children, so we didn't have very much money. She would always wake up at like four in the morning and bake for us, and even though we didn't have much, it was waking up to the smell of freshly baked cookies that really made me happy.
"And that's when I realised, the best things in life are actually the most simple things, and that nostalgia, that memory of my childhood inspired Moustache," Yang said.
"I love the bus much more than the original store, its just so much fun."
The Moustache Milk & Cookie Bus will be parked in Aotea Square until Sunday.