This Charlotte's web is not the spider in the children's book.

Two girls on a documentary from New Zealand are hoping that this marijuana would help them.  It is banned in NZ, one girl has an American mum, and and they have flown to USA to be treated. The other hopes it will be legalised in NZ when the other one is cured.

Charlotte's Web is a strain of medical marijuana processed into a marijuana extract[1] that is high in cannabidiol (CBD) content, called Realm Oil and Alepsia. It does not induce the psychoactive "high" typically associated with recreational marijuana use.

The Charlotte's Web strain is named after Charlotte Figi, whose story has led to her being described as "the girl who is changing medical marijuana laws across America."[2] Her parents and physicians say she experienced a reduction of her epileptic seizures after her first dose of medical marijuana at five years of age. Her usage of the strain was featured in the 2013 CNN documentary "Weed". Media coverage increased demand for Realm Oil and similar products high in CBD, which has been used to treat epilepsy in toddlers and children. While high profile and anecdotal reports have sparked interest in treatment with cannabinoids,[3] there is insufficient medical evidence to draw conclusions about their safety or efficacy.[3][4] 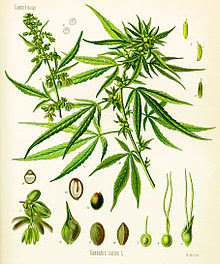 Cannabis as illustrated in Köhler's book of medicinal plants from 1897
Posted by Ann, Chen Jie Xue 陈洁雪 at 7:46 PM